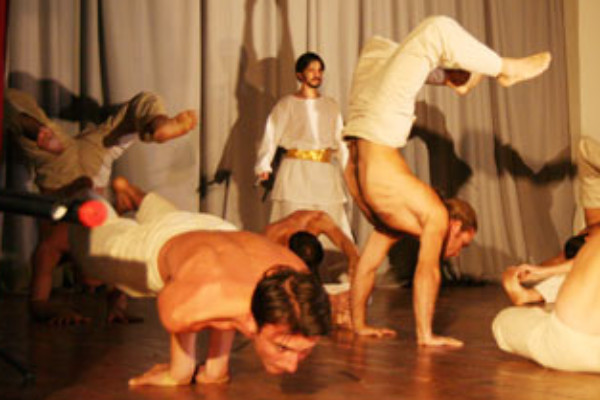 Art and yogic meditation are both creative states of human consciousness, coming from the same source, but directed in different directions: art is directed towards sensitive, exterior manifestations, while meditation towards the interior integration of shapes and sense impressions. This difference is related to secondary factors, not the essential nature of art and meditation. Meditation is neither pure abstraction, nor the denial of forms, except for in its final stages. Meditation implies the perfect concentration of mind and the elimination of unnecessary aspects regarding the subject chosen until we become perfectly conscious of it. Thus we can experience a particular aspect of reality, or experience it from a specific point of view.

Art acts in the same way: it uses the external shapes of the world not to imitate nature, but to reveal a superior reality by excluding chance and bringing visible form to the symbolic level, thus expressing a direct experience of life.

The same experience can be developed through the process of meditation, but instead of creating a formal expression (objective existence), it gives a subjective impression, thus becoming a forming agent of our inner structure, enriching and refining the consciousness of the one who meditates.

Meditation and art are interwoven

The highest, or most intense, state of meditation or perfect absorption is a meditation  without support / object. This could be described as a “spiritual space” or “vacuum”, a “creative void” where universal aspects of our innermost center, our Essential Self (ATMAN) can manifest most profoundly. In this sense, meditation can be described as the awakening of a creative attitude, of a superior, intuitive state of receptivity.

The artist who has the talent (inborn or developed by sustained, conscious effort) to express such an intuitive (or direct) experience is crystallising his inner vision in a visible, audible or tangible form; reversing the process of meditation into a process of materialisation. This presupposes that the artist has already acquired this inner experience. The process can be stimulated by external stimuli, by the ingenuity of the artist, or  through spiritual practice. These factors often act together: the fascinating beauty of nature, a very expressive face, an uplifted, illuminating thought can stimulate the latent genius; and as a result of conscious concentration on such flashes of illumination, the experience gains a definite form and finally a work of art can be materialised.

Artistic creation is not directed exclusively in the opposite direction to yogic meditation, as it may appear, at a glance, to be taking into consideration only formal expression. In its conceptual phase it is following the same path as meditation. Art and meditation are interwoven, creating thus one another.

For the artist nothing matters but the act of creation

The importance of art and its relation to meditation is not only in how it is created. The effects of a work of art, the experience it evokes for the one contemplating or listening to it is also very important. The artist may sometimes not be interested in the effects of his work. For him, the only thing that really matters is the process of creation. The main importance of art in human life is the inspiration it may give to all those who open their hearts to it. Great works of art had a greater influence on humanity than great sovereigns. Even great religions have survived usually through their artistic creations. Artistic language speaks to us through the ages, even after all languages of those times fell into oblivion.

Artistic emotion is an act of re-creation or a creation in the opposite direction, that is towards the source of inspiration. It is an act of absorption liberating us from our little, limited ego into a creative experience of a widened universe and inter-correlating manifestations of life.

Art and spirituality meet here in a sphere of consciousness where differences no longer exist. Whenever spirituality is a living force, it finds its natural and spontaneous expression in art. In the same way art, in its highest forms of expression, becomes a spiritual path.

A perfect combination between art and spirituality was realised for example by yogis or buddhist mystics who materialised their vision in sculptures, pictures, hymns, architecture, philosophy and poetry, spreading the message of their sublime realisation throughout Asia.

The contemplation of beauty, says Buddha, frees us of all egotistic preoccupations; lifts us up to a plane of harmony and perfect happiness, creating a rehearsal for final liberation, encouraging us to long even more intensely for self-realisation, or the discovery of our essential reality, revealing thus this reality as a focal point of universal forces that penetrates us as sunrays do through a convergent lens. Light rays are not stopped by this lens nor by its focus, they do not become a property of the lenses. The lenses serve just to focus and reunite them in the picture of the Sun, to reunite its forces until it glows. În the same way the individual being serves to focus the forces of the universe until it glows, that is until the sparkle of inspiration or illumination. Here the individual becomes conscious of his universal nature – in other words, the universe becomes conscious of itself.

Authentic Art is a Manifestation of Beauty

Authentic beauty is at the same time authentic meaning, making an intimate relationship between man with not only his immediate surroundings, but also with something that is beyond his momentary existence as an individual, “separate” being. This makes a yogi or an authentic artist enter a spiritual relationship with mountains, rivers, trees, rocks, as well as humans, animals, gods and demons. Beauty does not exclude the terrible as we can see it in superb representations of the terrible forces in Tibetan paintings. Contemplative artists of the East were absorbed in their own being, a waterfall, a landscape, a face or whatever they wanted to represent, until they united with the object. Only then did they start to create from inside, without considering the outer forms. Inner experience was more important for them than external training. A completely interiorised being transcends common rationality, following laws that manifest from above the mind.

The rhythm of a traditional far Eastern painting, for example, has no rational or discursive origin: its is an inner rhythm just like the rhythm of music.

Art, as a manifestation  of authentic beauty (or of Inner Truth), through the purity of introspective vision, is the greatest creative power. Even imperfections of the outer world can be a stimulus for creativity, as real beauty can be discovered only by the one who – with the help of his awakened consciousness – is able to complete the incomplete.

The wise men of the East considered art as a meditative  practice, like a form of yoga. „Virility in life or in art is the possibility to grow.”, say the Buddhist texts, describing art as a dynamic process towards perfection. Buddhist meditation inspired new ideals in art in Central Asia and the Far East, just the same as it did earlier in its original country. The creation of a work of art was considered an act of creative meditation, while artistic emotion and the contemplation of a work of art was part of a spiritual training. Without it no-one could say that he really had received a spiritual training. Adepts of Zen practice aim for the direct unity with the inner nature of things, where exterior accessories are just obstacles in perceiving Truth. This thirst for the abstract conducted Zen practitioners to prefer black-and-white sketches to elaborately coloured paintings of classic Buddhist Schools.

What gives value for a work of art?

The value of a work of art is not given by its subject, but the impulse for inspiration, the spontaneity of inner experience by which it was created and that it awakens in the one who contemplates it. Our capacity to respond to the hidden meaning of a work of art had to be cultivated as well as the capacity to create such a work of art. As the artist has to master the material and the canvas he is creating, the one who wants to live art has to prepare his instrument of receptivity to realise such a profound resonance; possible only when the mind is completely empty of all parasitic thoughts and secondary preoccupations( in this sense, the term SHUNYATA, creative void, can be called a perfect state of resonance).

Tibetan religious art goes even further. The one contemplating a work of art is not only expected to re-experience the vision of the artist by being absorbed in each detail, but also to re-create it in his consciousness, fill it with life until it regains its reality in his inner vision just the same as if it were projected in space. Unlike the work of art which has become an object existing independently from the artist, the the one modelling the work of art has to re-absorb his vision, inverting the act of creation and re-integrating it in the essence of his consciousness. This liberates him from the attachment towards his own creation and from the illusion of separation between subject and object.